← My Beta Vacation: Opting Out to Avoid Burnout
Lilu in Azeroth (RP): Introduction →

This post will discuss mega-guilds vs smaller guilds, a Blizzcon 2014 wrap up, and a quick blurb about the Nexy Show!

Big vs Small: Which guild is right for you?

We’ve all seen or heard about mega-guilds. Alea Iacta Est (AIE) on Earthen Ring US, Horde side, and Convert to Raid (CTR) on Aerie Peak US, Alliance side, are two that immediately come to mind. These aren’t just large guilds, these are guilds so large that they quickly surpass the limit cap of 1,000 members so that “co-guilds” must be formed and guild chat connected with an in-game add-on called Greenwall, which was developed for this purpose.
Now that the Warlords of Draenor expansion is upon us, many of the guild perks have been stripped away. There is no XP benefit anymore, as well as many other benefits we enjoyed. So, whether you’ve remained with WoW, you’re returning after a hiatus, or you’re a new player, you may be confused about which type of guild you belong in, or even if you need a guild at all.
For me, the mega-guild is a perfect fit. As chatty as I am on social media, I’m the polar opposite when I get in-game. I don’t want to talk (except for my bf or very closest friends), I don’t want to be bothered or noticed. Some people complain that you get lost in a mega-guild, but that’s exactly what I want. Yet, these guilds set up a Looking For Group chat channel which has lots of activity. This allows me to get in on a group if I’m in the mood and have time. It allows me to be social when I feel like it, and anonymous when I feel like it. Plus, forums exist to help people find guild activities and raid groups. There’s always something going on, any time of day or night. For someone with an irregular schedule, this can be extremely useful, especially at end game.
Because many people are looking for a more personal feel in a guild, the smaller guilds might be the answer. Do you want to be greeted by name when you log on? Do you want to engage in guild chat with a closer-knit group of people? Are you able to be online when the bulk of your guildies are raiding or running in various groups? Or you just want to be able to socialize? Then perhaps the smaller guild environment is right for you. Keep in mind that many smaller guilds are unable to complete the achievements to make some guild perks available, so if this matters to you, do some research on what perks you need and make sure that the guild can offer that. But being in a guild with friends can offer some unrivaled experiences in game, chances to laugh and have fun with other people through the same activity. I do keep a character in the Bitter and Salty guild on Earthen Ring US because I like those people and I like spending time with them in game. But their guild environment is one that is conducive to my need for space when I want it. You may have to hop around some smaller guilds before you find one that is a right fit for you.
If flying solo is your thing, you don’t need to be in a guild. Some people attach a stigma to that, but the fact of the matter is that it’s a personal choice many people exercise. There are methods like Open Raid and O-Queue to help you find a raid group or pick-up group when you feel like it. It’s a no-pressure way to enjoy the solitude if that’s what you need. Let’s face it, as stressful as day to day life can be, many of us turn to these games as a sanctuary, a place to unwind. And intrusive chatting can ruin that for many people. If you’re more comfortable being alone, don’t let the lack of a guild tag dissuade you from what’s comfortable to you.

I was among the fortunate to have attended Blizzcon 2014, and it was probably one of the best Blizzcons yet. Perhaps because Blizzard has so many titles now, and another on the way in the form of a first-person shooter (FPS). It’s not just World of Warcraft-con. Starcraft II continues to dominate the eSports scene in real time strategy games, and has a new stand-alone expansion upcoming. Diablo III, a dungeon crawler, recently offered up some new content. Hearthstone, a collectible digital card game, is new to eSports this year, but the competition was riveting, and there’s an expansion, Goblins vs Gnomes, in the works. Heroes of the Storm, a MOBA similar to League of Legends (from Riot Games), while still in technical alpha stage, showed the potential for eSports dominance with some exhibition matches. And now with the inclusion of Overwatch, a team-based FPS, Blizzard once again delves into a new genre with the potential for eSports competition, as well as being a fun casual game. Blizzard seems to have the uncanny knack for taking any genre of game and making it fun and easy for casual players, but offers up the options for hardcore players to take it to the next level. 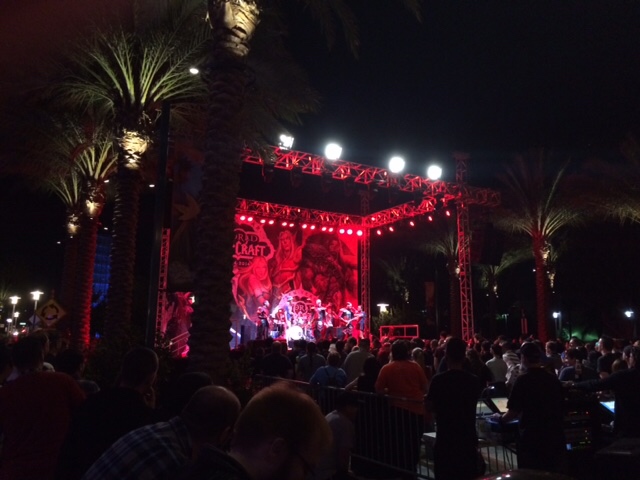 Also exciting at Blizzcon was the additional information and a teaser trailer for the new Warcraft movie, and the premier of the Looking for Group documentary about the development of World of Warcraft, its rise as a global phenomenon, and what it means to so many people, from celebrities to members of the Warcraft community. Plus there were lots of displays, booths, and game demo areas for attendees to enjoy, as well as the WoW 10th Anniversary Party on Friday night, where you, too, could try some Thunderbrew Ale!
Next year’s Blizzcon might be the biggest one yet, with as much is going on right now! Will it expand to 3 days? We’ll see next year!

I was lucky enough to join Esmeralda Sky (@casuallycasual) on her World of Warcraft podcast, the Nexy Show! Joining me was @Jaygurrl, and the three of us discussed our viewpoints on social issues in gaming from our own unique female-gamer perspective in a segment called Fem Fem Fem Logic. While none of us are self-described feminists, we have a different viewpoint on several of the gaming issues that have upset many in social media. You might find our viewpoint different and refreshing.
I recommend you make the Nexy Show (@NexyShow) a part of your permanent WoW podcast rotation. But if you’re looking for the episodes I mentioned, you can find Episodes 17 and 19 here at http://thenexyshow.podbean.com! I look forward to your feedback!

← My Beta Vacation: Opting Out to Avoid Burnout
Lilu in Azeroth (RP): Introduction →